Bertus Luske is shot dead last night. He was involved in criminal affaires. The Amsterdam squatters won't mourn about this loss.

They know Bertus Luske for more than 20 years. He evicted squatters with violence in 1979 and many times after. His last known attempt was at the squatted harbour building the ADM http://www.contrast.org/adm

Bertus Luske became widely known when he evicted the 'Lucky Luyk' -Jan luykenstraat- in 1981. The squatters took back the building with force. Many protests followed and his bank withdrew supporting him. Finally he sold the building to the city who turned it into social housing.

In the early nineties squatters managed to occupy a few buildings owned by him in the Haarlemmerweg, Amstelstraat and in the neighbourhood 'De Pijp'. Some of the squatters could withstand his intimidations.

Later on squatters looked for a confrontation with Bertus L. and squatted Amstel 182 and Wagenstraat 12 in 1996. They published a booklet about his business dealings and managed to withstand intimidation. The following struggles in court were won by the squatters. Bertus Luske sold his property in the innercity to the city and bought the harbour building at the ADM which was squatted shortly after.

In 1998 he used a shovel to break down the wall of the building when the squatters where still inside. 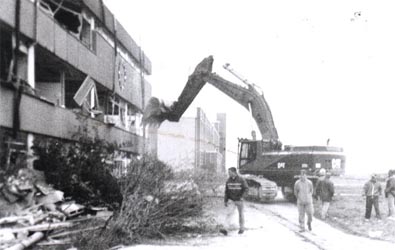 The squatters didn't leave the building and repaired the damage by building a new wall.